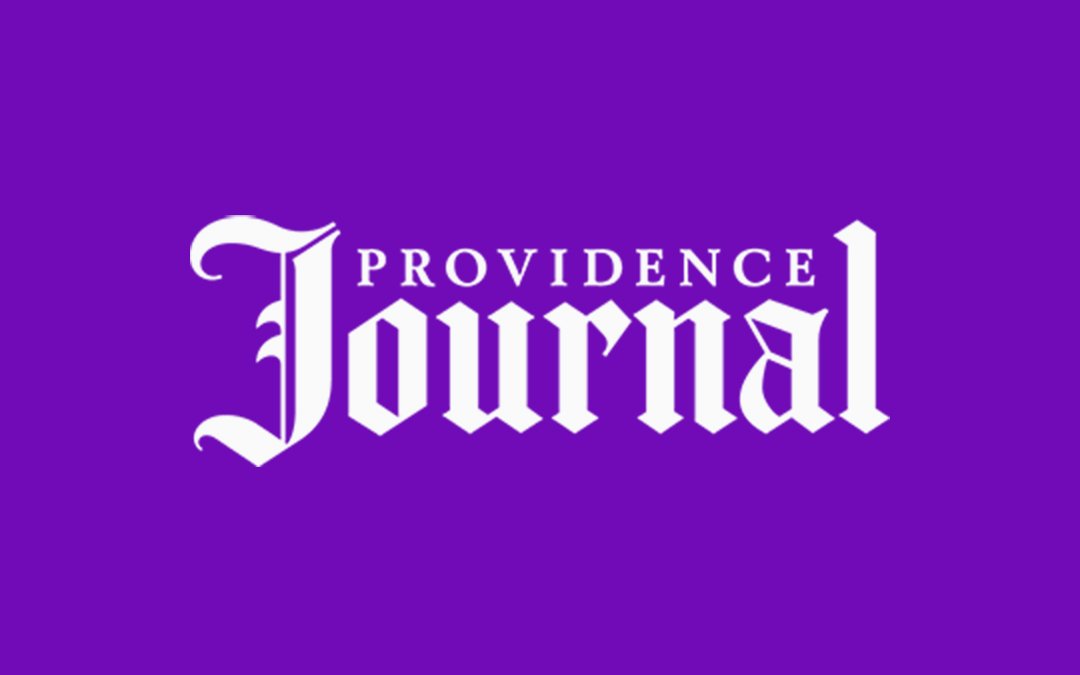 By Susan McDonald / Special to The Journal

The former EMT, who once offered psychic readings out of an East Providence beauty salon, has become a wildly successful medium with bookings across 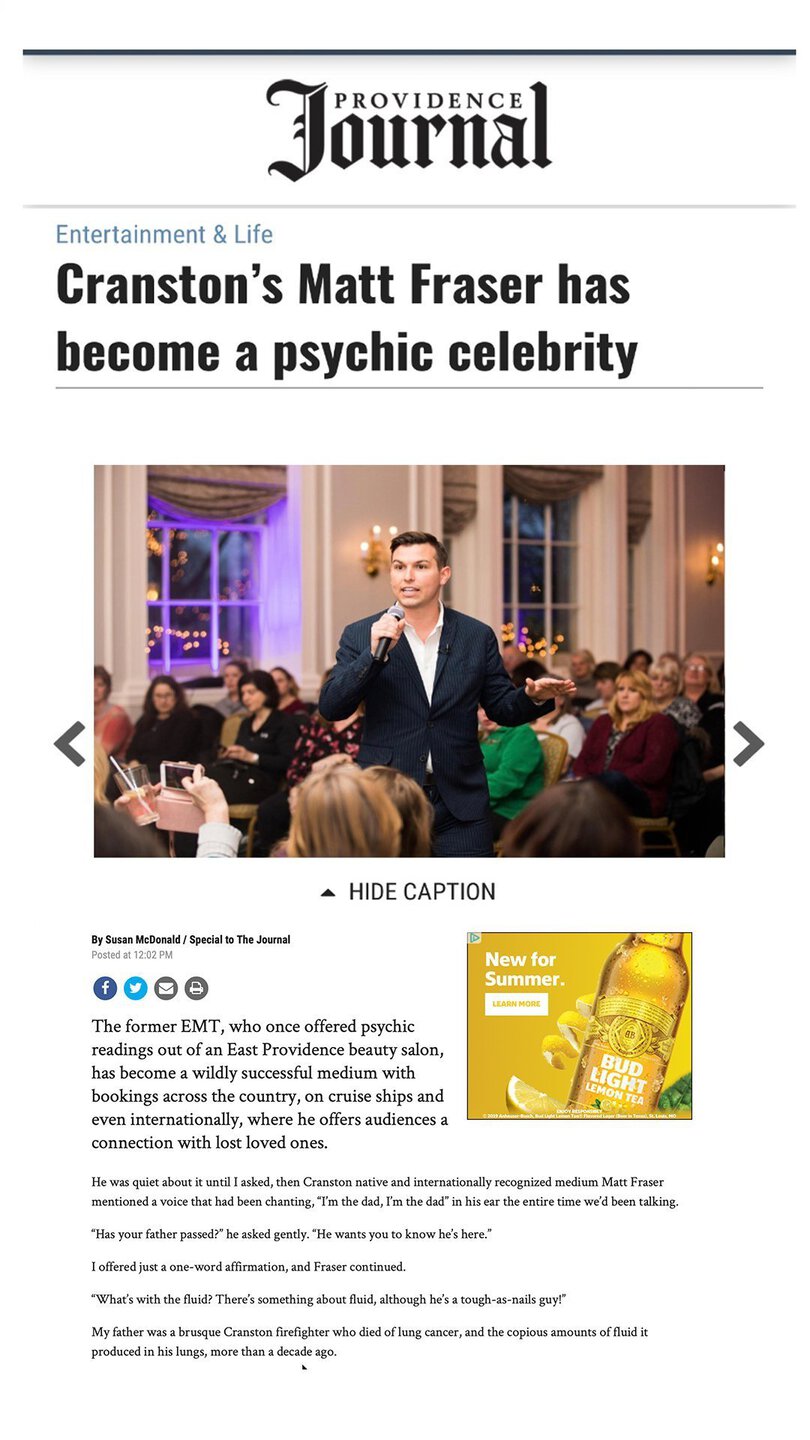 the country, on cruise ships and even internationally, where he offers audiences a connection with lost loved ones.

He was quiet about it until I asked, then Cranston native and internationally recognized medium Matt Fraser mentioned a voice that had been chanting, “I’m the dad, I’m the dad” in his ear the entire time we’d been talking.

“Has your father passed?” he asked gently. “He wants you to know he’s here.”

I offered just a one-word affirmation, and Fraser continued.

“What’s with the fluid? There’s something about fluid, although he’s a tough-as-nails guy!”

My father was a brusque Cranston firefighter who died of lung cancer, and the copious amounts of fluid it produced in his lungs, more than a decade ago.

“He wants you to know he can breathe on the other side. And the pain in his legs is gone, too. He’s just as he was before he got sick,” Fraser continued.

With a few other tidbits — “He knew everyone in this world, didn’t he?” and “He’s back with his old partner, Bob,” referring to my father’s construction buddy — the 27-year-old Fraser affirmed the skills that have made him a popular medium with a calendar bursting with bookings across the country, on cruise ships and even internationally.

“We’re switching to theaters now because we’re too big for hotels,” Fraser said in an interview before stepping on stage in Stamford, Connecticut. “We just can’t keep up with the people, and we hate to turn them away.”

As the venues get bigger, though, his style doesn’t change. He runs into the audience, sidles up beside people and begins chatting. It’s a long way from the readings he started conducting for $5 or $10 in the back of Salon on Turner, an East Providence beauty shop.

“I’m the first one to say what I do is crazy,” Fraser exclaimed, his voice animated. “I don’t even know how I do it. I hear things, see things but I can’t explain it.”

Shadows and silhouettes appear in his mind’s eye, and when he starts talking to the living person the messages are intended for, he’ll often hear names, dates and places and see visions of their memories.

“I feel a sensation in my body, too — maybe my chest will feel heavy or I’ll get a tingling sensation in my head related to what the deceased loved one felt,” he said. “It’s validating.”

Fraser was working as an emergency medical technician in the Boston area with no money to put gas in his car, but he would use the gift inherited from his mother and grandmother to help people process the loss of their loved ones. As word got out and Fox News and CBS radio asked for interviews, his popularity skyrocketed.

“People trusted me to connect with their loved ones,” he said. “I just love this work. People walk in sad and scared, but they leave feeling loved. Even if they don’t get the connection they hoped for, they know their loved ones are with them.”

While there are other mediums on television and doing in-person shows, Fraser said his approach is different, and he “reads more people in events than any other mainstream medium.”

He acknowledges skeptics, but notes that the energy of departed loved ones is strong.

“Our loved ones want us to think of them,” Fraser said. “Heaven is like looking at old photographs. When people start to realize that, they’re not afraid of it.”

His job, in a sense, is to guide the living to open the door to communication with the departed.

“Your loved ones don’t follow me home like a conga line!” he laughed. “When you leave, your loved ones will continue to try to contact you. People become more aware. They’re always trying to reach us. We just have to be receptive.”

That’s not to say the messages always come when the living request them, he said.

“They want to reach us at our best, so they’ll often wait. Luckily, the other side knows when the time is right and how we’ll react.”

Fraser remembered being in Capriccio’s for dinner when he suddenly saw a young man who died in a motorcycle accident and felt an urgent need to deliver a comforting message from him to a woman dining nearby.

“He’d never said goodbye,” he said of the man.

The most common queries from the living are if their deceased loved ones are okay and can see what goes on here. Those who lost someone to suicide wonder if they’re in heaven.

“It breaks my heart that people still think this way,” Fraser said of the religious belief that those who commit suicide are not allowed into heaven.

With homes in Cranston and West Palm Beach, Florida, Fraser spends much of his time on the road, and he invites people to experience a show.

“There’s no way you can remain a skeptic when you see a show. To have someone receive a message, it’s just great,” he said. “I feel like my job is about showing them there is another side.”

As for my impromptu reading, he left me with the assurance that when I look at old photos, my father will be with me. The very next day, a package arrived from my stepmother containing my father’s old Navy yearbook and an album of photos from my childhood. I pored over both, with my dad, for hours. 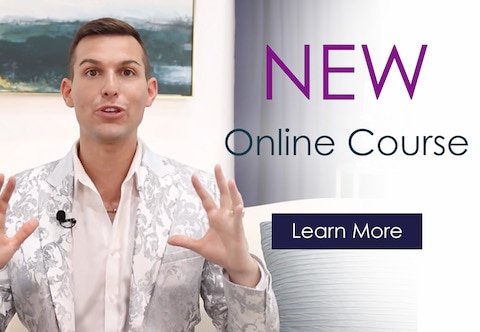