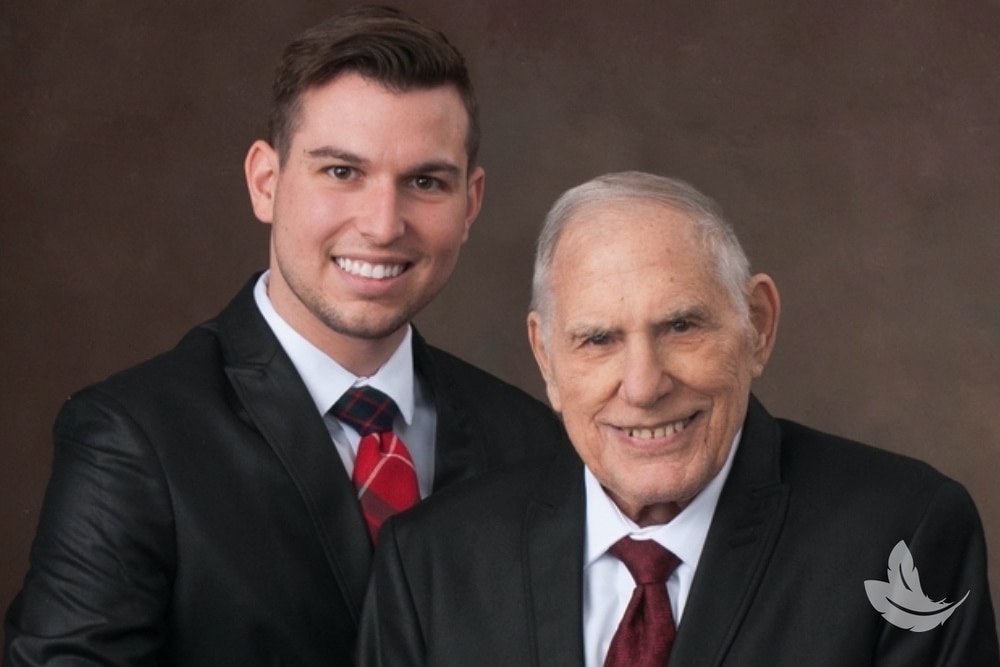 A Tribute To My Grandfather

Many have you have been asking about my grandfather Lou who used to work as my “hand stamper” at my shows. It is with sadness that I have to let you all know that he has passed away peacefully last Thursday. He LOVED his job and meeting all of you at the shows and getting to know so many of you. He had a great life and I am blessed and honored to have had so many years with him.

Most of all I was happy to have shared him with all of you. Below is his obituary and the way he would have liked for you to remember him. I want to thank so many of you who have left me comments and sent emails to my office. I deeply appreciate them all.

Lou loved peach trees and the wine his father made in barrels. He lived most of his life in Silver Lake and during a simpler time. Near Neutaconkanut, he played baseball with friends, ate polenta on Sundays, and met a dark eyed beauty, Mary, who would one day become his wife. After his own backyard wedding, Lou’s best friend married Mary’s best friend one street over in similar fashion. In 1956, Lou and Mary had their beloved daughter, Angela. Lou played guitar and sang for Angela’s first dance at her wedding.

Lou always enjoyed games of chance. He played the same three Wild Card numbers every day of his life. And won. He religiously watched Wheel of Fortune and Price is Right and loved to play Hi Lo Jack.

Lou was a jewelry caster and for most of his life happily whistled Italian songs while he worked 3 jobs. In retirement, he drove around town in his gold Chevy Malibu, made friends wherever he went, and taught his grandson, Matthew, to dig for clams at Oakland Beach. At the beach, Lou loved to wear a military hat he found, landing him the nickname, “the Captain” and local legendary status. A widower, Lou reconnected with his high school sweetheart, Virginia, “V, ” at age 65.

In 2015, Lou joined his grandson, Matt Fraser, the renowned psychic medium on his tour, where Lou worked as a “hand stamper” and usher. Lou loved his job. Lou was known as a flirt. He often got distracted by kissing the hands of women when he was supposed to be stamping them.

Some of those Lou cherished passed before him: He outlived the two wonderful women in his life, Mary and V, his brothers, Louis and Vincent, and his parents, Angelo and Maria. Lou always smiled, laughed and said, “I lived a good life.” He is singing “C’e la Luna Mezzo Mare” with the angels in Heaven.