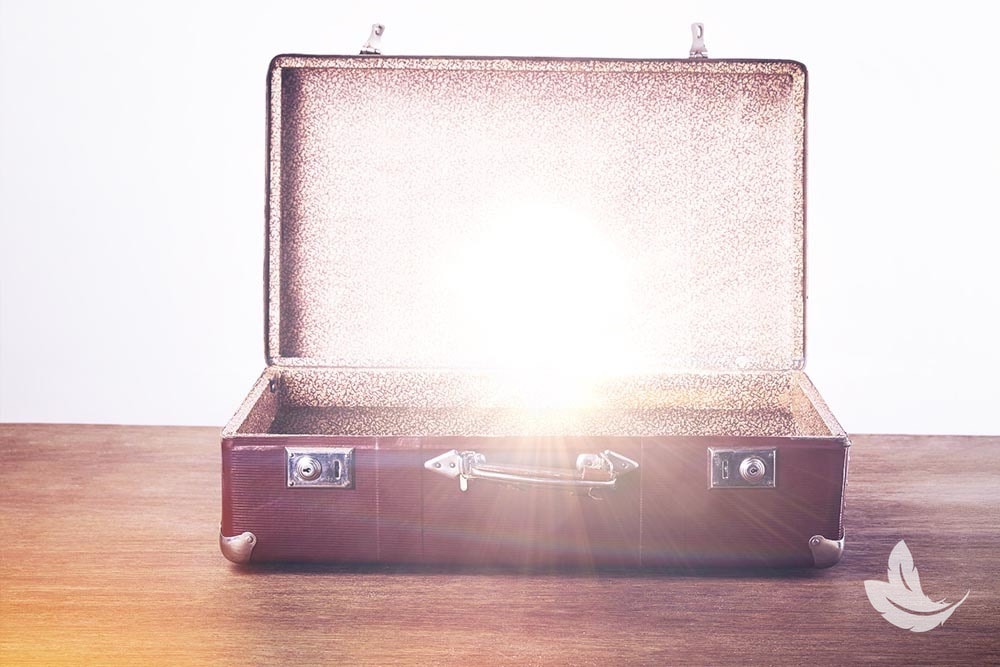 The Cat in the Suitcase

Newlyweds Bruce and Jeannie had finally finished packing and were loading their bags in the car. Their cat, seeing the front door ajar, seized the opportunity to make a break for it. As he darted outside and across the street the unlucky feline was struck by a car. Having used up his nine lives, he sadly took his last breath.

Horrified, Bruce and Jeannie looked at each other. They were already running late to the airport and had no time for an animal funeral. Bruce acted quickly. Grabbing an empty suitcase from the house, he put the cat inside, and left the suitcase on the porch.

“We’ll bury him in the suitcase when we get back,” he assured his wife. The couple hurried off, and when they returned a week later, they were horrified to find the suitcase gone. It had been stolen from their front porch.

The couple never saw the suitcase, or their cat, again. Time passed, and their memory of the unfortunate event faded.

Years later in 1985, Jeannie Klein took her oldest son, Rick, to the pediatrician after he suddenly stopped eating. Jeannie had tried to tempt him with his favorite foods, but the boy refused to take a bite. The doctor wasn’t too concerned, telling the worried mother that it was probably a phase that would soon pass. He prescribed a tonic, but nothing changed. Rick still refused to eat. A few days later, the doctor was surprised to see Rick and Jeannie back in his office, and this time drew blood and conducted some tests. The tests indicated that Rick’s spleen and liver were enlarged. The doctors were concerned. “At least he doesn’t have Leukemia” they reassured the worried parents. But when they finally settled on a diagnosis, it was grim. Rick had Neuroblastoma.

Neuroblastoma is a tumor which usually affects the eyes and brain. In Rick’s case, though, the tumor was wrapped around his stomach.

Rick was just four and a half when he was diagnosed. The condition had advanced quickly, and the doctor told the stunned parents that there was just a 5% chance of survival. The couple also had a toddler named Mark, who was 2 and a half at the time. Mark was put in the care of family members as the worried couple focused on finding a cure for Rick.

Rick fought his cancer for a year. On Mother’s Day, a surgical team took out most of the tumor, and were optimistic that they had gotten it all.

But shortly after the operation, Rick looked up at Jeannie. “Mom, they didn’t get it all.”

“Oh no Rick, they did, they got it all” Jeannie assured him.

Rick was correct. When the tumor came back, this time even more aggressively, the family took  the boy to Sloan Kettering Hospital, where doctors had been treating children with experimental drugs. When they got there, it was too late. Rick passed at Sloan Kettering. Devastated, the parents contacted an undertaker to bring the boy’s body home.

After the funeral, the family struggled with their grief. They had another son named Nick, and Bruce and Regina tried their best to be strong for their boys.

Years passed and the couple experienced another devastating loss. Nick, after earning a full ride baseball scholarship to college, sustained a bad hit to the ribs during a game. He required multiple surgeries and was given opioids for the pain. Despite his parents’ best efforts, the bright, athletic young man became addicted to pain killers, and after years of self-medicating, overdosed at age 30.

A year after Nick passed, Bruce and Jeannie were looking for answers. They heard about a psychic medium named Matt Fraser. The couple debated going to see him when he came to their area  – they had been to a mediumship demonstration before, one with thousands of people in the audience. In such a large crowd, they were unable to feel a connection to their boys.

Jeannie asked Nick to send her a sign. Sure enough, the next day, as friend called. Matt was coming to King of Prussia, Pennsylvania, and she had just bought tickets to his event. Jeannie took this as the sign she’d been waiting for and bought tickets for Bruce and herself.

On the night of the event, the couple felt they had a chance at a reading. When they sat down, Jeannie put her pocketbook on the seat next to her to give herself a little space, but when a woman came and asked if the chair was taken, Jeannie moved it to the floor.

After his introduction, Matt walked around the auditorium, stopping at the row where Bruce and Jeannie were sitting. He made the whole row stand up. “ There is a young male here who passed of an overdose. He’s talking about his teeth and said something about having a mass.”

Before Jeannie or Bruce could speak up, the woman in the next said that made sense to her, and that it was her nephew.

Matt went on, “I see you taking him to school, and having friends over, making him feel as normal as possible, and I know you took him out of state for treatment.”

Jeannie was frustrated. What Matt was saying fit her boys perfectly. Nick had lost his front teeth in a hockey game and was very conscious of the replacement caps.

Jeannie explained “I could tell that Matt didn’t think that he was hearing from the woman’s nephew. Suddenly he looked at me and asked if we were together.”

“No, but everything you’re saying makes sense to me. My son Rick passed from Neuroblastoma – we took him out of state for treatment, and I tried to make like normal for him. Everything you said fits” As soon as he heard  that, Matt focused on Jeannie and Bruce.

Matt struggled a little with the messages coming through. He was confused by the conflicting messages he was hearing.

Jeannie knew what was wrong and told him she had lost two sons. Two souls coming through! Suddenly the messages made sense to Matt.

“They are showing me balloons – Whose birthday is it ?”

Nick’s birthday had been just the day before, He would have been 31.

The family had put letters in Nick’s coffin. Not only that, but his dad found an un-mailed letter from Nick when he was cleaning his room, in the letter, Nick said he didn’t think he would live long.

“They’re telling me that it’s hard for you to get out of bed sometime. You didn’t want to put up the Christmas tree – but you did it for Mark.” Bruce and Jeannie confirmed that this was true.

“The boys are telling their mom please be strong for Bruce and Mark.”

Mark was the couple’s middle son, a police officer. He had watched both brothers pass and had recently lost his partner and best friend.

Seeing Matt lifted them Jeannie and Bruce from their depression. The went back to see Matt two more times. The second time they brought Mark.

“I’d love Mark to get some closure, he’s had so much loss. And I want him to know that he’s being protected by his brothers” said Jeannie.

“No one in this family is going to die”

Bruce and Jeannie feel the presence of their boys often. “They send us signs all the time. Before Rick died, I said, if you get to heaven, send me purple flowers. Sometimes in Spring I’ll look out the kitchen window and see fields of purple flowers that we never planted.”

Right after Nick passed the couple spotted an unusual bird tapping on the window. He was black with a white breast with a red heart on his chest. Bruce looked it up and found that it was a Goosebeak. They had never seen that bird before, or after. They were sure it was a sign from Nick.

There were also two crows that would sit and look in the window. The family had been in their home for 21 years and never saw crows before Nick died. Jeannie knew there was something special about these crows – she left food out for them, named them Crow Magnum and Cheryl Crow.

Bruce remembers something Rick said to him before he passed. It had seemed like an odd thing for such a young boy to say, but suddenly it made sense!

“Rick said, No one in this family is going to die” I realize that he meant that he would never leave us, he and his brother would always be there.”

What about the cat in the suitcase?

At the end of the reading, Matt looked puzzled.

“The boys are talking about a cat! A cat who was run over and died and is with them.”

“We don’t have a cat” said Bruce. Then he remembered the cat in the suitcase. “Well we did, but the boys didn’t know anything about that.”

Bruce told Matt the story of the cat in the suitcase.

Matt laughed. ‘Are you from Maine – they do stuff like that in Maine!”

It turned out Bruce’s family is from Maine.

Matt will always remember Jeannie as the cat I the suitcase lady, and the couple will always be grateful to Matt for bringing through their boys.